The Fluval Sea LED Marine 3.0 is a full spectrum light designed for marine aquariums. The color and spectrum of light emitted is perfect for the saltwater environment, enhancing the natural coloration of your tank inhabitants. It is perfect for most saltwater tank setups.

Fluval is a brand which has built its reputation on well-built, highly-functional, and reasonably priced products. Their reputation as a leading aquatic brand is well founded, with a range of quality products from filters, heaters, and fish tanks to bacteria supplements and water conditioners.

In this article we will run through the key features of the Fluval Sea LED Marine light and give both the positives and negatives that this LED aquarium light brings to the table. This light is the sister to the Fluval Plant 3.0, which is designed for freshwater tanks. 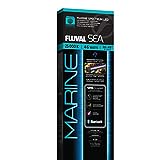 The Fluval Sea LED Marine 3.0 has many great features which make it a great option for you to use to illuminate your saltwater tank.

The major function that this light offers your aquarium is a fully programmable and customizable 24 hour lighting cycle. At the most basic lighting simply turns on and off, but this doesn’t emulate the natural cycle of the rise and setting of the sun and moon. With the fully controllable 24 hour lighting cycle, your tank is given lighting which more closely emulates the natural environment. This helps to bring out the natural behaviors of your tank inhabitants, both fish and invertebrates like corals and mollusks.

There are four distinct lighting cycles, sunrise, daytime, sunset, and moonlight. The general settings are for a gradual red/orange sunrise, followed by a bright day, red sunset and blue moonlight. These settings are pre-programmed to follow a set timed cycle, and also to emit a certain amount and spectrum of light. However this cycle is fully programmable and you can change both the timing and light intensity and spectrum of each lighting cycle.

Having full control over the timing of the lighting cycles means that you can adapt the program to your tank’s specific needs, and also to how you want your tank to look. For instance if your corals need more or less light than they are getting you can easily change the daylight timing accordingly. And if you want to see the sunrise or sunset on a specific day, you can change that too. Most useful is being able to adjust the light spectrum emitted, as you can change this to provide your corals with the light they require.

Having four distinct lighting cycles throughout the day also mimics the natural cycle of day and night. Both fish and invertebrates such as corals and anemones feel more comfortable in an aquarium environment which mimics their natural environment. Animals which feel comfortable are more likely to display their natural behaviors and be more active.

There are seven unique band waves which are emitted from the Fluval Sea LED Marine 3.0. These seven band waves produce full spectrum results, which aid in generating strong coral growth. This light supports both SPS and LPS hard corals, and also soft corals. What specific corals this light can support depends on their individual lighting requirements, and will also depend on the depth of your tank. The PAR levels reduce dramatically with depth, as we will tell you about in a latter section of this review. However the PAR values produced are enough to support healthy coral growth.

The seven unique band waves are 400 nm, 420 nm, 440 nm, 460 nm, 480 nm, 10,000 – 13,000 K, and pink. Corals mainly utilize light at the blue end of the spectrum for photosynthesis, which is why the Fluval Sea LED Marine 3.0 has been designed to emit five different blue light wavelengths. The added wavelengths of different temperatures allow for the proper illumination of your tank and also to ensure the healthy growth of corals.

This LED light can be turned on and off manually, but to have full control and access to all the functionality you will need to get the Fluval Smart App on your smartphone. With this app you have easy access to be able to control your light as you need.

It is very easy to adjust the timings of the four different lighting cycles. You are able to fully customize the timing of each of sunrise, daytime, sunset, and moonlight. There are also five easy to use sliding bars which control the light spectrum and color the LEDs emit. These colors are pink, cyan, blue, purple, and cold white. While it is very fun and very useful to be able to change the spectrum emitted for your exact needs, for instance in order to best facilitate coral growth, there are also 3 pre-set lighting habitats to choose from. These are sunny reef, deep sea glow, and color boost.

Related:   The Effect of Nitrite in Aquarium Tanks - How To Reduce Aquarium Nitrite

Sunny reef tries to emulate the lighting effect of the full sun on a coral reef, while deep sea glow has much more of a blue tint to the light to imitate the change in light color which trickles down to deeper portions of the reef. Color boost is designed to bring out the vibrant colors of your aquarium inhabitants. Saltwater reef fish and corals often have amazing colorations; the result of trying to be seen amongst thousands of similar species. Many aquarium LED lights almost seem to dampen these natural colorations and differences, so this setting is very useful in getting the best from your tank.

There are four different sizes available in the Fluval Sea LED Marine 3.0 Aquarium Light. These are 15 – 24″, 24 – 34″, 36 – 48″, and 48 – 60″. There is also the Fluval Nano LED which is designed for nano and desktop aquariums of 5 gallons and lower. A new design has made this light sleeker and lighter, being 50% lighter than previous models. The reduced amount of aluminium used also leaves behind a smaller carbon footprint, which is brilliant as we are all concerned about the environment in this industry.

In terms of LEDs and PAR (photosynthetically active radiation), obviously the smallest sized model has the smallest number of LEDs installed and has the least PAR, whilst the largest has the greatest. The LEDs utilized in this aquarium LED light have a 120 degree spread, which means that even the edges of the aquarium will be illuminated. With an IP67 waterproof rating you can install the light fixture close to the water’s surface without fear of water or splash damage.

This comparison table makes it easy to see the PAR at different depths, how many LEDs each model has, and the lumens produced.

Installation and Ease of Use

Like all Fluval products, the Fluval Sea LED is very intuitive to set up and use. All you need to do.is purchase the correct size model for your aquarium. As this light features extendable brackets they can be used in a range of sizes. Always pick the most appropriate for your tank, and it is recommended that if you have a tank which is in between sizes, for instance 24″, which can be fitted to the 15-24″, or the 24-34″ model, that you go for the larger unit. This is so you don’t end up with dark patches to the sides of your tank.

When installing the light you simply need to mount it on the tank using the mounting brackets. Once mounted and plugged into a mains power outlet, it is ready to go. While you can turn it on using the buttons on the side, to gain access to the full range of features you need to download the Fluval Smart App to your smartphone.

As we have already mentioned, through using the app you are able to change the timings of the 24 hour lighting program and the spectrum and color of light emitted.

To be honest there aren’t many drawbacks with the Fluval Sea LED Marine 3.0. Unlike some more pricey saltwater aquarium LEDs, the Fluval Sea LED Marine 3.0 doesn’t have any weather effects to boast. However this doesn’t mean that they don’t do their primary function extremely well and still have a range of other useful features. Some people think that weather effects are a bit gimmicky anyway, and while they are great for keeping kids (and us adults) entertained and interested, they don’t have any real benefit to the aquarium itself.

Whilst this light is no slouch, and produces plenty of light for corals to use for photosynthesis, it doesn’t have extremely high PAR readings, especially in deep tanks. Therefore be a bit wary if you want to try and have high light requirement corals, or want a deep tank with these corals.

Overall, the Fluval Sea LED Marine 3.0 is a brilliant option for marine reef tanks. It has some amazing features which can be fully controlled and customized in the Fluval Smart App.

These features include a 24 hour lighting cycle with four distinct modes, and the ability to change not only the start and end time of each of the four modes, but also the intensity and spectrum of light emitted from each mode.

With five sizes available, from nano to 60 inches, there is sure to be a size which fits your aquarium. With the relatively cheap price tag attach to the Fluval Sea LED Marine 3.0 you should definitely think about one for your tank!