What Do Sharks Eat? 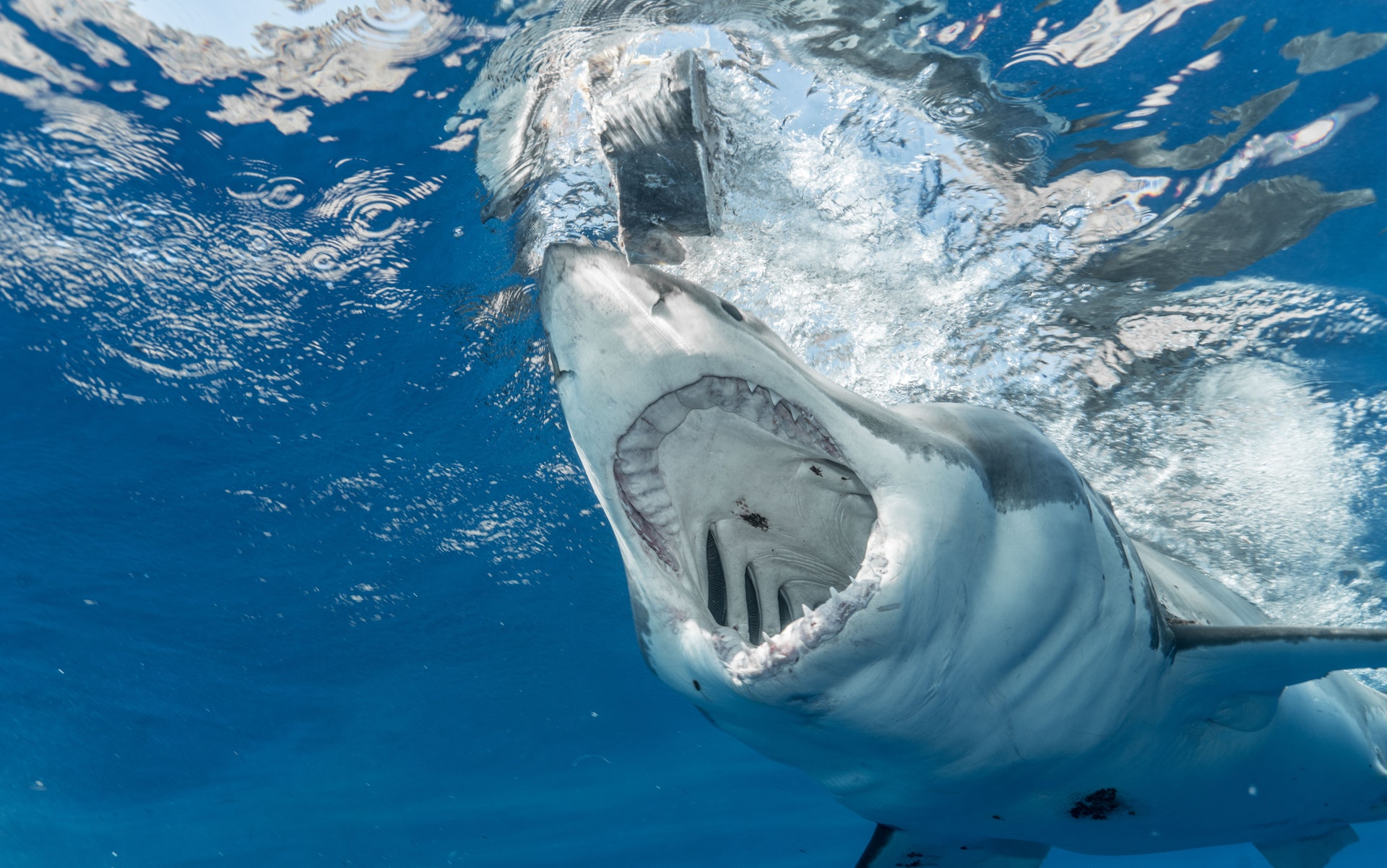 With more than 1000 species of sharks and rays still around today, you can imagine that sharks eat a wide range of prey.

There are many different feeding strategies seen in sharks, and these different strategies are seen and exhibited in the differences in their anatomy.

For example shark teeth are specialized to certain prey items. There are four main types of shark teeth; dense flattened, needle-like, pointed lower with triangular upper, and non-functional. Each of these types of teeth are designed to catch different prey. We will get more into detail about each of these tooth types later on.

The different diets of sharks also have an impact on other aspects of a shark’s anatomy, such as the shape of its tail, and also how they breathe.

Sharks can be lumped into two broad categories according to their diet; carnivorous and planktivorous sharks.

For instance large sharks such as the Great White have teeth designed for ripping and tearing flesh. These teeth are called pointed lower with triangular upper. The combination of pointed lower teeth and triangular upper teeth make it easy to rip and cut large prey items. As juveniles Great Whites mainly predate upon fish and other sharks as their jaws aren’t strong enough for larger prey. As they grow and the cartilage in their jaws mineralizes and strengthens, they then move on to larger prey such as marine mammals like cetaceans (whales and dolphins) and pinnipeds (seals and sea lions).

Other carnivorous sharks have adaptations which enable them to be specialized to hunt crustaceans.

Nurse sharks are a great example of this. They have specialized teeth called dense flattened teeth, which as you can imagine are very hard and tough making them perfect for crushing the shells of crustaceans they find beneath the sand. Nurse Sharks also have two fleshy barbels on their lower jaw which are incredibly sensitive chemosensory organs to aid in them finding food in the substrate. 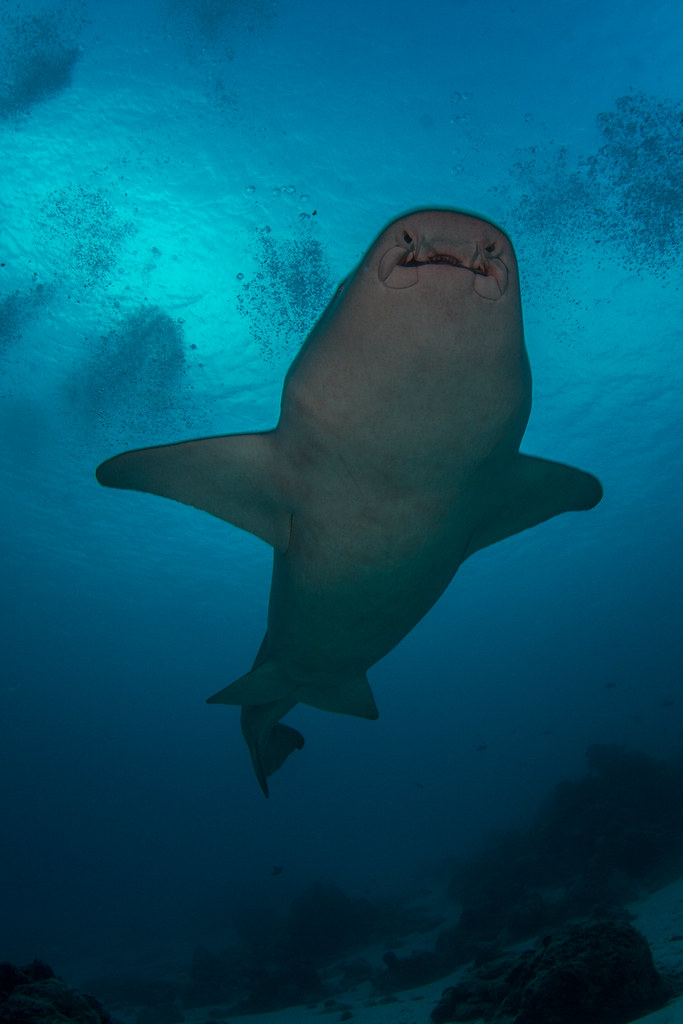 The underside of a Nurse Shark, showing the fleshy barbels which are used to sense prey.

Hammerhead sharks are the most famous example of a shark’s adaptations to finding prey hiding beneath the substrate. The ‘hammer’ of a hammerhead shark aids in electromagnetic reception as sensory organs called ampullae of Lorenzini are spread over a greater area. Hammerheads will cast their head over an area like a metal detector, checking for muscle movement. Their heads also make it possible for them to hold down their favorite prey, stingrays, while they bite.

Blue sharks (Prionace glauca) are incredibly fast and feed on pelagic prey such as squid and fish. They have sharp pointy teeth in order to grip this slippery prey. However they are opportunistic and never turn down an easy meal. They will happily eat seabirds, other sharks, and carrion. Blue sharks are known as the ‘wolves of the sea’ because they are often seen hunting in groups. 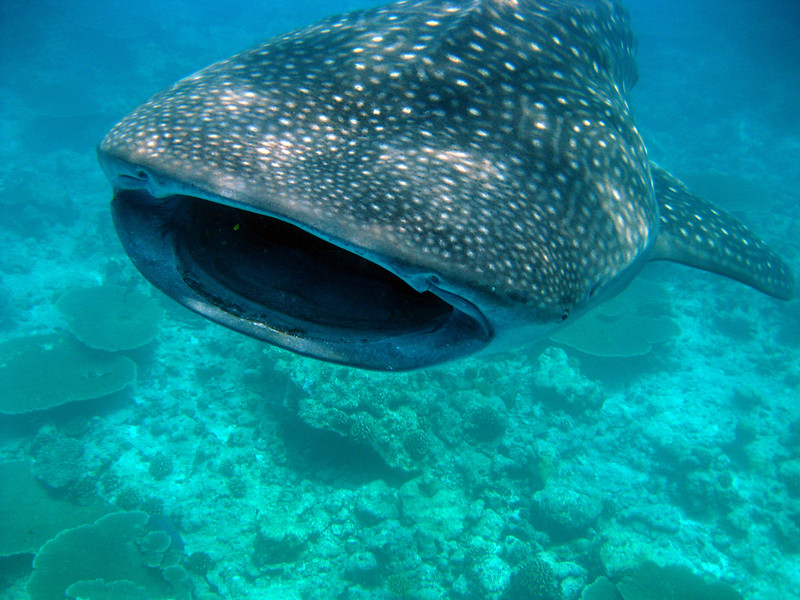 Planktivorous sharks have adapted to feed on small planktonic animals such as krill and the larvae of crustaceans, mollusks, and echinoderms. These sharks have the fourth main type of specialized tooth; the non-functional shark tooth.

In these planktivorous sharks, the teeth are greatly reduced or not present at all, hence the name non-functional tooth.

Instead these sharks filter their planktonic prey from the water as it passes over their gills. They have very large mouths and passively filter food items by swimming with their mouths open. The gills are reinforced by gill rakers, which aid in the capture of food. As food is captured and builds up, they then swallow it for digestion.

This method of capturing prey is similar to that of the baleen whales. They are also very large animals which prey on some of the smallest!

While technically planktivorous sharks are carnivorous as well, they just feed on tiny animals, the difference is that they don’t actively hunt their prey.

Whale sharks and Basking sharks are famous for being gentle giants. They swim with their huge mouths wide open, almost looking like they’ll swallow you whole! However these sharks are very docile and not aggressive at all.

In conclusion, sharks eat a whole range of things, from large prey such as whales to tiny planktonic organisms.

Whatever sharks eat they are often opportunistic and are willing to go beyond their normal diet for an easy meal.