In this article we will give a comprehensive API Quick Start review.

API Quick Start is an aquarium bacteria supplement which adds beneficial nitrifying bacteria into the tank system to give it a kick start. It is perfect for use in cycling your new tank setup.

If you remember from the aquarium nitrogen cycle, nitrifying bacteria convert ammonia into nitrite, and nitrite to nitrate. Ammonia is produced as waste organic matter such as fish feces and waste food decomposes. It is also released directly into the water column by fish through their gills.

API quick start works to boost these bacterial colonies to increase your aquariums capacity for removing ammonia and nitrite. 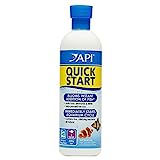 In new tanks which haven’t been cycled, new tank syndrome will be a given; this is where ammonia and nitrite levels spike. This can take a few weeks, and if you have fish will be lethal. Not only new tanks, but established tanks can also suffer from new tank syndrome.

Putting these bacteria into new tanks will greatly speed up the fish tank cycling process, making the tank safe for fish much sooner than otherwise. Adding to established tanks will keep the bacterial colonies in the filter system healthy and ensure ammonia and nitrite levels are stable.

This review is on the freshwater Quick Start; there is also a marine option for saltwater tanks.

Conversely it is a waste of plastic if you have to buy multiple smaller bottles for a large aquarium. We try to be as environmentally conscious as we can here at CoralRealm! You can recycle most plastics, but not using multiple bottles is always better.

API quick start is extremely easy to use. All you need to do is put the correct amount of the bacteria supplement into the tank water.

There isn’t anything fancy that you need to do; there is no activation for anything like that required for the bacteria to work. Simply add the correct amount for the size of your aquarium and you are good to go.

API conducted independent research to test the effectiveness of their product. The results were utterly conclusive; it works, and works well.

Nitrate is much less harmful and toxic to fish than ammonia and nitrite. However if left to accumulate to dangerous levels will result in nitrate poisoning.

So not containing denitrifying bacteria isn’t a deal breaker, but is certainly a disadvantage.

In this final section of this API quick start review article, we will run through some of the most frequently asked questions that we are asked about this product.

How often should you use API Quick Start?

API quick start should be used in new fish tanks to kick start the cycling process and greatly reduce the time it takes for nitrifying bacteria to colonize the aquarium filter and substrate.

It should also be used after you have conducted a water change, or after you clean out the aquarium filter.

Medicating sick fish can often have detrimental effects on the beneficial bacteria in your tank; antibacterial compounds and agents don’t know which bacteria to kill! Therefore after you medicate your fish you should use API Quick Start to replace the bacteria.

You should be testing for ammonia and nitrite frequently; if you have identifiable levels then you can use this product to help lower the concentrations.

How does API Quick Start compare to other brands?

How does API quick start fair against some of its competitors?

API Quick Start vs Seachem Stability: Seachem Stability is a great aquarium bacteria supplement which will help to prevent new tank syndrome and ammonia, nitrite, and nitrate poisoning. It contains a mixture of nitrifying and denitrifying bacteria, so will remove ammonia, nitrite, and nitrate from the water column. API Quick Start doesn’t contain denitrifying bacteria.

How much API Quick Start should you use?

This is actually extremely simple and nice and easy; 10 ml treats 10 gallons of water. So if you have a 50 gallon tank you should use 50 ml of API Quick Start.

Nice and Simple! If you are using the API Marine Quick Start, then the dosage is 20 ml per 10 gallons of water

Hopefully this API Quick Start review has given you the info you need to see if this product is the right one for your tank.

In short; yes it is! This aquarium bacteria supplement by API is a brilliant kit that will help to prevent ammonia and nitrite buildup, and stave off ammonia poisoning, nitrite poisoning, and new tank syndrome.