Aquarium general hardness is an important part of water chemistry and plays an important role in the overall health of your fish tank.

It is also known as aquarium GH, or aquarium water hardness. Most likely you will see aquarium general hardness simply shortened to GH. In this article we will give a complete overview of aquarium GH; what exactly we mean by this, why it is important in the tank environment, how to test and maintain GH levels, and how to increase and lower GH in aquariums.

What Is Aquarium General Hardness

It is measured in degrees of General Hardness, or dGH for short. It can also be measured in parts per million (ppm). 1 dGH to equal to 17.9 ppm. Magnesium and calcium are found in all water sources, and so many fish will have evolved in environments with hard or soft water.

Magnesium and calcium ions are found in tap water; you’ll have probably heard that you either live in a hard or soft water area.

If you live in a hard water area, as you conduct water changes you will be adding a large amount of ions into your aquarium, and so will find it hard to lower the GH in the aquarium. Conversely in soft water areas, you may find it difficult to increase GH as the tap water contains very little ion concentration.

Why is Aquarium General Hardness Important?

General hardness is very important in the fish tank environment for a number of reasons. First is that both calcium and magnesium are vital to both fish and plants.

Magnesium is vital to photosynthesis in plants; without magnesium, photosynthesis won’t be able to occur. It is also used in carbohydrate metabolism and cell membrane stabilization in plants.

In fish, magnesium regulates muscle and nerve function and helps to produce muscle, bone, and DNA.

Calcium is an essential macronutrient in plants which is used as a structural component of cell walls and is also used as an intracellular messenger.

In fish 99% of calcium is present in the scales, bones, and teeth. The other 1% is extra-skeletal and is found distributed throughout the organs and tissues. This extra-skeletal calcium is found as free ionized calcium ions, or within phosphate and bicarbonate compounds. It can be found attached to proteins as well. Free ionized calcium ions are critically important to muscle movements and in osmoregulation.

Problems with osmoregulation will cause major health issues in your aquarium fish, and will likely result in fish death.

As you can see, aquarium general hardness is vitally important for the health of your tank. Both fish and plants alike require calcium and magnesium for critical uses and processes, and will develop problems, issues, and illnesses if the dGH is too low.

What Is The Difference Between Aquarium GH and KH?

What Is the Ideal Aquarium General Hardness?

The ideal aquarium general hardness depends on what fish tank setup you have and what plants and fish that you have.

As a rough generalization though the following table will tell you easily and clearly what  general hardness range you should be looking for.

As you can see, for most freshwater tanks the dGH should be between 4 and 8. However it can vary greatly. Some plants prefer much softer water, and don’t do well in hard water. However all plants need calcium and magnesium to be healthy. African cichlids love hard water and need quite a high general hardness.

For saltwater tanks it is a little bit more technical, as you need to aim to get the ratio of calcium to magnesium in the tank the same as in the ocean. This is approximately 1:3. As general hardness is the measure of both of the ions, you need to measure both separately for saltwater and reefs tanks.

How do you Test for Aquarium General Hardness?

It is very important to test for aquarium general hardness often. It is impossible to tell whether you have high or low GH without testing your fish tank water.

All you need to do is put the required amount of tank water into the test tube, and then add the testing solution.

It is important to realize that these kits test for both magnesium and calcium ions combined. Therefore these tests can give false positives. For instance if you have a very high calcium ion concentration but no magnesium at all, you will still be given a high GH reading, and vice versa.

If you suspect a magnesium or calcium deficiency in your freshwater tank then you can use one of the following calcium and magnesium tests. Once you know which is deficient you can work to raise that compound.

How to Raise GH in your Aquarium

There are a number of things you can do to raise GH in aquariums. Have a read through the following points, and choose the best option for your tank setup. All of these techniques will raise the GH of the tank, but some may be better than others in your aquarium.

The easiest way of reintroducing calcium and magnesium ions into the water is through water changes. Tap water contains these ions, and using a water conditioner won’t remove these essential ions from the water.

If you live in a soft water area though, your tap water won’t contain much calcium or magnesium. So conducting a water change won’t introduce enough ions to raise the GH sufficiently. If you are using an RO/DI water system, then the GH of the water will be 0.

If either of these is the case then luckily there are still a number of things that you can do.

You can use aquarium remineralizers to reintroduce these important ions and raise general hardness in the aquarium.

If you have a planted tank or fish that are sensitive to slats, such as catfish, then you will be wanting to use a different product to raise general hardness in the aquarium. Using Seachem Equilibrium is a brilliant alternative. It contains essential trace elements in the form of sulfates. Seachem Equilibrium contains calcium sulfate, magnesium sulfate, potassium sulfate, ferric (iron) sulfate, and manganese sulfate.

You should use these products each time that you undertake a water change and put them into the new water before you add it into the tank. You can use the amount you need to raise the GH to the level you require. If you aren’t sure then use a test kit to measure the dGH before adding the new water.

Another way you can raise the GH of your aquarium is by using crushed coral. Crushed coral is simply coral skeletons which have been crushed down. Coral skeletons are made from calcium carbonate, and will release this into the water column. Be wary though, as it contains carbonate, so will also raise KH, and so subsequently the pH as well.

You can either use crushed coral as a substrate, or you can put it in a filter bag in the aquarium filter. It can also be effective just hidden in a mesh bag simply at the back of the aquarium.

You can use aragonite the same way that you use crushed coral; you can use it as a substrate, in a mesh bag hidden in the tank, or in the filter.

The AquaNatural aragonite sand has been ethically harvested from the Bahamas under lease from the government. This is very important as some aragonite sands available have questionable sources.

Aragonite is great to use in fish tanks with fish which like hard water. African Cichlids for instance are the classic hard water loving fish.

Wonder shells also look pretty great in aquariums, but be wary that they will keep releasing ions and raising GH. If you have a specific GH in mind then you should test the water regularly and ensure that you don’t overshoot.

How to Lower GH in your Aquarium

It could well be the case that the general hardness in your tank is too high. Fish and plants need calcium and magnesium, and will use what is in the water column, however if you live in a hard water area then this may not be enough to prevent these minerals building up.

There are a few things that you can do to lower general hardness. 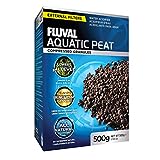 Using peat or sphagnum peat moss in the chemical filtration media tray of your aquarium filter will lower the GH of your aquarium water. Normally you will need to use a fine filter mesh to hold the peat, as you don’t want what is basically dirt to get out and start floating in your tank!

As the water flows through the peat the calcium and magnesium adheres to the peat, and thus are removed from the tank. When you replace the peat, the ions are gone forever. Care needs to be taken when using peat to lower general hardness though. Peat contains humic acid and tannins, which lower the pH. If you need to have a stable pH, or need a slightly alkaline tank, then do not use peat.

Distilled water is water which has been boiled, and the resulting steam has been condensed and collected. When you boil water, only pure water comes out in the steam, any chemicals such as phosphate and nitrate, particles, and metal ions like magnesium and calcium are left behind in the solution.

Distilled water is very easy to get from any shop, not just pet stores. Most retailers should have distilled water, as it isn’t just good for aquariums; have a sip yourself!

RO/DI water stands for reverse osmosis/deionized water. This is a bit of a mouthful, and can seem like some strange chemistry thing that mere mortals won’t know how to use, but it is actually quite simple once you get your head around it. RO/DI systems basically remove everything except H2O from the water. 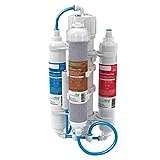 The reverse osmosis part gets rid of large particles such as dirt and sand, but also rids the water of salts and other chemical compounds. The deionization part rids the water of ionized compounds like phosphate, nitrate, and also magnesium and calcium. They are very commonly used by reef tank owners, as corals are notoriously fickle and do NOT like tap water, even treated!

If you use this system to get nice pure water for your aquarium, the general hardness will be 0 dGH. There are a couple of ways you can use this, but like distilled water you shouldn’t add it directly to your aquarium as you may cause one area of your tank to suddenly drop in dGH, thereby giving your fish osmotic shock. You can remineralize RO/DI water by adding an aquarium remineralizer like

Seachem Equilibrium
$11.73
Buy on Amazon
to raise the GH to the level you need. You can also mix this water with your treated tap water if you have hard water, thereby lowering the GH of the tap water you are putting into your tank.

You should check water chemistry regularly when using indian almond leaves as the effect they have won’t stop; they will keep leaching their compounds into the water column. Once you are at the GH you require you should be wary about leaving them in, or at least don’t have as many if you have used a lot.

Hopefully this guide on aquarium general hardness has been interesting and useful. GH is an important part of water chemistry, but can easily be forgotten about in amongst seemingly more important aspects. But for healthy fish and plants you need to have the appropriate general hardness!