Chemical Filtration – All You Need To Know

Home » Blog » Chemical Filtration – All You Need To Know

Chemical filtration may sound like there’s someone in a lab coat doing science experiments in the back of your filter.

So What Is Chemical Filtration?

Whilst mechanical filters work by removing bits of debris and detritus floating in the water column, and biological filters utilize beneficial bacteria to remove ammonia, nitrite, and nitrate, chemical filters use chemical substances to remove impurities.

The substances used can vary depending on what is being targeted for removal from the water.

The most common by far is activated carbon. You will often find this in triple stage filtration aquarium filters.

But what chemicals and impurities do chemical filters target?

Well if you think back to the nitrogen cycle, the natural cycling of nutrients and nitrogen in your aquarium will lead to the formation of ammonia, nitrate, and nitrite.

While you may recognize these as compounds which the bacteria which reside in the biological filter will remove, the chemical filter will also work to remove what gets through!

But chemical filters don’t only remove nitrogen based chemicals, they remove a number of impurities in the water column.

These impurities include heavy metals such as copper and lead, any medications you may use to treat sick fish, tannins from driftwood decorations and indian almond leaves, and compounds such as salt.

There is no right answer for what is the best chemical filter media.

It depends on the setup of your individual fish tank and the needs that it requires to be met. But this section will lay out some of the most common types of chemical filter media and the benefits that they will bring to your fish tank. 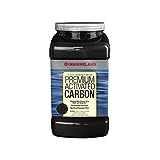 Activated carbon is by far the most commonly used chemical filtration media. It removes contaminants such as tannins that cause odors and discolorations, to leave your aquarium water clean and clear.

Zeolite is a naturally occurring mineral that can also be manufactured easily. It is a highly porous mineral that works to remove ammonia and heavy metals from the water column through an ion-exchange mechanism.

Ion-exchange works by replacing the sodium originally attached to zeolite with something found in the water column. Whether this is ammonia, lead, or nickel it doesn’t matter. It is a straight swap for the sodium, so it is therefore taken from the water.

This ion-exchange will continue until the sodium in the zeolite is depleted, at which point you will need to replace the media.

The zeolite media by Seachem is brilliant to use in both freshwater and saltwater tanks. With only favorable reviews you know that you will be getting a good product. It can be used anywhere where there is good water flow; filters, tricklers etc. You will need to use a media bag to contain the zeolite.

In some ways synthetic man-made chemical medias are better than natural products. They are specifically formulated to remove impurities and toxic compounds from the water column.

Seachem’s Purigen is a brilliant synthetic chemical filtration media. It controls the nitrogen based compounds ammonia, nitrite, and nitrate in the tank. It does this by removing the organic nitrogenous waste that will otherwise be broken down into these constituents.

Purigen is designed for both freshwater and saltwater use. It polishes water to unparalleled clarity. When you first put it in the filter it is white, and darkens progressively as it becomes exhausted. It is easily cleaned and renewed by treating it with bleach.

Oxides can be a great chemical media. They will readily adsorb phosphates and silicates from the water column. Phosphate is an important plant fertilizer and is needed for plant growth. However if the concentration gets too high in the tank it can fuel unwanted algal growth. Algae are plants after all!

As they adsorb phosphate, oxides such as alumina oxide and iron oxide are a great way of controlling or treating algal blooms. They are called phosphate removers. They are much more suited for use in saltwater tanks, but can be used in freshwater systems too. Be careful though, as if your freshwater tank is phosphate buffered, using oxides will remove the buffer.

We have again recommended a Seachem product; not surprising considering they are that good! Seamchem’s PhosGuard is made from alumina oxide, or aluminium oxide. It is produced to be spherical in shape, so it doesn’t get bunched and lose effectiveness. PhosGuard is very porous and allows good water flow. You will need a filter bag to house this media.

Mixtures of different chemical media can be a great way of targeting multiple unwanted compounds in the aquarium.

As you can see, the different chemical media are all good at getting something different from the water column. Activated carbon target odors, discoloration, chlorines etc, while zeolite targets ammonia and heavy metals.

If you have a problem with all of this, then a mixture of the two can work wonders, rather than switching them both in and out of the chemical filter. Different mixes will have different impacts on the water quality.

Two great chemical media mixes are above. One is Chemipure by Boyd Enterprises. It is a mixture of activated carbon and resin. The resin provides an ion-exchange surface very similar to zeolite. Together, this blend of carbon and resin removes organic molecules, odors and discolorations, along with toxins, medications, phenols, and dissolved metals.

The other is a blend of activated carbon and zeolite from Marineland. Marineland is a great company who have a reputation for making fantastic products. This is no different; the activated carbon removes discolorations and does while the zeolite removes ammonia and heavy metals.

If the chemical filter media is left too long without cleaning or replacement, you will find that instead of removing toxic compounds and heavy metals, they instead release these compounds back into the water column.

This happens when the media has absorbed all it can, and now the aquarium water which runs over it contains less than the media, so the water strips the chemical media of these compounds.

Each type of chemical media will have different maintenance needs and requirements. For instance activated carbon will need to be replaced about every month or so to remain fully functional.

However Purigen doesn’t ever need to be replaced as it is a synthetic material. All you need to do is regularly check the media, and when they have turned from white to black, they have absorbed all they can. At this point you remove the balls and clean them in a bleach solution. Make sure you wear gloves! The bleach will remove the contaminants, and they will turn white again. Make sure you rinse them thoroughly before putting them back in the filter.

Chemical filtration is incredibly useful in an aquarium filter. It works to remove the impurities in the water column that mechanical and biological filtration cannot.

Chemical filters can work in a number of ways, for instance by adsorption or ion-exchange. These processes mean that different chemical media will remove different impurities. Activated carbon will remove odors and discolorations such as tannins. Zeolite will remove ammonia and heavy metals, while oxides remove phosphates and silicates.

You should always use chemical filtration media in the way recommended by the manufacturer, and ensure to clean and maintain it to the standard required.