Nitrogen is the most abundant element found on Earth, and is vital to the survival of all life.

We could ramble on for ages about all these different nitrogen cycles and the slightly different variations found in different habitats, but we’re all interested in how the nitrogen cycle works in the aquarium. So we will focus on that here, and where and how each part of the cycle takes place in the tank system.

Nitrogen Cycle in the Aquarium

The nitrogen cycle is a repeating cycle of reactions and processes through which nitrogen moves through the tank environment, and through plants, fish, bacteria, water, and air.

But we have to start and end somewhere! So we will begin with atmospheric nitrogen.

During nitrogen fixation, free atmospheric nitrogen (N2) is transformed into inorganic nitrogen compounds such as ammonia (NH3). Ammonia reacts in water to form the ammonium ion (NH4+), which can be used by plants as a source of nitrogen. The amount of ammonium formed in water depends on the pH; in acidic water more ammonia is converted to ammonium, in alkali water more ammonia remains.

In the aquarium nitrogen fixation can occur in the water column itself by free living bacteria, or by nitrogen fixing bacteria living in the substrate.

The bacteria are found on the roots of plants. The plants give the bacteria energy they make through photosynthesis, and in return the bacteria fix nitrogen that the plants need.

This is also found in aquariums; if you have rooted aquarium plants then they will have nitrogen fixing bacteria growing on their roots providing a source of nitrogen.

The amount of ammonium formed in aquarium water depends on the pH. The more acidic the water is, the more ammonium is formed. 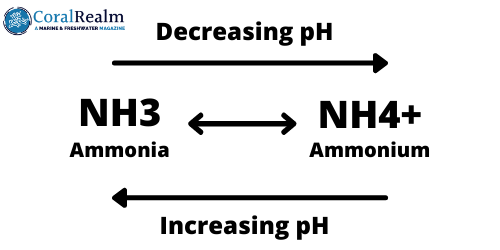 This stage is incredibly important in the aquarium setup, as ammonia and nitrite are incredibly toxic to fish and other animals living in your tank. Nitrate is much less toxic, and has to build up a lot to poison your fish.

Nitrates are also used by plants as fertilizer as an important source of nitrogen, whilst they cannot use nitrite.

Immobilization is the opposite of mineralization. Instead of microbes converting decaying organic matter, to inorganic nitrogen, ammonia, these microbes instead use the nitrogen themselves to fuel their processes.

Bacteria need nitrogen too; it is one of the basic building blocks of life. Immobilization describes how bacteria and microbes use inorganic nitrogen themselves.

Denitrification is the last and final stage of the nitrogen cycle. During denitrification, nitrate is converted in atmospheric nitrogen (N2).

This atmospheric form of nitrogen is then released by the denitrifying bacteria into the water column. N2 can dissolve in water, and if it gets too concentrated it will be released into the air.

The N2 in the water column will then be available to nitrogen fixing bacteria, and the aquarium nitrogen cycle starts again.

Diagram of Nitrogen Cycle in Aquarium 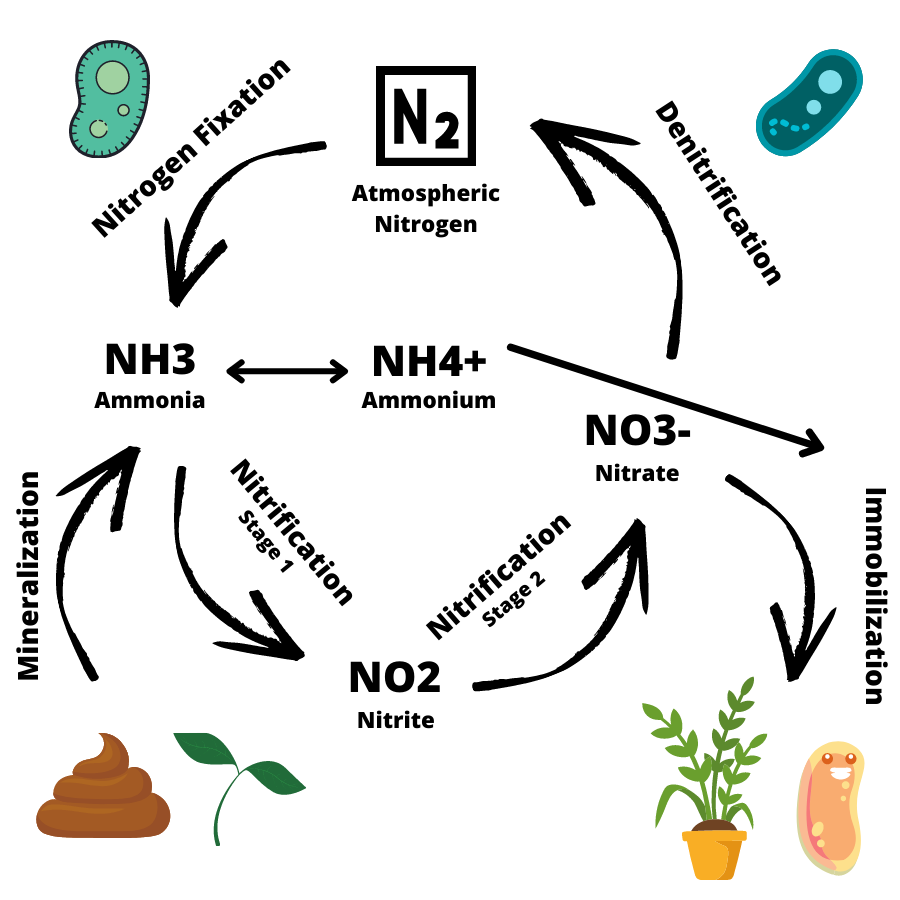 Benefits of the Aquarium Nitrogen Cycle

As we have said previously, nitrogen is a fundamental element key to life. It is a vital cog in the nucleic acids structures of DNA and RNA, which carry the genetic material of every living thing.

Fish will get the nitrogen they need from their food; whether that be algae, fish food, or worms.

Healthy Levels of Nitrogenous Compounds in your Aquarium

The aquarium nitrogen cycle can be quite hard and confusing to understand, but luckily it is simple to understand what concentration of nitrogen compounds are healthy in your tank setup. Performing regular water changes is important in maintaining these levels. Water changes can be made easier using a product like the Python water changer.

Ammonia – Ammonia is extremely toxic to fish and other animals that are found in aquariums. As such there is no level of ammonia that is appropriate to have in the tank. It needs to be 0 parts per million (ppm). Even small concentrations can cause ammonia poisoning.

Nitrite – Nitrite is also highly toxic to fish and other animals. As with ammonia, the nitrite level in your fish tank needs to be 0 ppm.

Nitrate – Nitrate is the only compound from the aquarium nitrogen cycle that can be allowed in any concentration in the tank. It is much less toxic to fish and animals, but in very high concentrations is toxic. Ideally you want the nitrate level to be below 25 ppm, but anything below 50 ppm is acceptable. However if you have an algal growth problem or are trying to get fish to breed, you should get the concentration below 10 ppm. Higher than 50 ppm and you risk nitrate poisoning.

Importance of Cycling Your Aquarium

As important as nitrogen and the nitrogen is to the survival of your fish and plants, it can be a double edged sword.

Ammonia and nitrites are very toxic in high concentrations to animal life in your tank, such as fish and shrimp, to animals such as mollusks and echinoderms. They can build up to dangerous levels incredibly quickly in the tank. Nitrates are less toxic than these compounds, but are also very unwanted in the tank at high concentrations.

But you need these compounds in the water column so that your plants can get the nitrogen that they need.

This is where the importance of cycling your tank comes into play.

Basically, aquarium cycling is where you let the completely setup tank run for a couple of weeks, but importantly without any animals.

During this period, you should test your aquarium regularly with test strips to see the levels of ammonia, nitrite, and nitrate. You will see huge fluctuations in the concentrations of these compounds until the tank has fully cycled.

If you had fish in the tank during this period, they wouldn’t be able to handle these wild fluctuations. They would either die or become incredibly ill.

Once you have seen that the concentrations of ammonia, nitrite, and nitrate have become constant, and within the healthy range, you can begin to add your animals. Using an aquarium bacteria supplement such as API Quick Start or SeaChem Stability can greatly reduce the time cycling takes.

Hopefully this article on the aquarium nitrogen cycle has been helpful, and given you an understanding of the processes involved.

It is important to understand where and how ammonia, nitrite, and nitrate are formed in the aquarium. This gives you the knowledge of how to remove these compounds if they build up in your tank.

Ammonia and nitrite are highly toxic, and need to be at 0 ppm to be safe for your fish. Nitrate is much less toxic, and ideally should be around 25 ppm.