Phosphate (PO₄³⁻) is an important source of phosphorus for all plants, including those in your aquarium. Floating aquarium plants, and aquarium plants with rhizomes such as java moss and java fern will draw it directly from the water column. However high concentrations can be very problematic in aquariums, especially saltwater tanks. This is why aquarium phosphate remover products have become so popular.

Where Does Phosphate Come From?

Phosphate is a natural compound that is found in all freshwater and marine ecosystems. It is a very important source of phosphorus for plants, including algae (this is important!), which is a building block of life alongside nitrogen. Phosphorus is a foundation of DNA and RNA and is used by plants in photosynthesis and respiration. As such many aquarium plant fertilizers will contain phosphate.

It will appear in your tank from the decomposition of fish feces, excess food, and plant matter. Some tap water sources have a high phosphate content as it helps to protect the pipes. It is also used as a preservative in a lot of fish foods.

Buffering products can also contain significant levels of phosphate; pH, carbonate hardness, and general hardness buffers can all contain phosphate, so make sure to check before you use these products.

What Is An Appropriate Aquarium Phosphate Concentration?

What concentration of phosphate you should be aiming for in your tank will depend on your setup. Freshwater tanks can handle a much higher level of phosphate than saltwater tanks. This is because phosphate directly inhibits calcification in hard corals like SPS and LPS corals and coralline algae. This is a serious problem, and will affect growth and health.

In most freshwater tanks the concentration of phosphate should be between 0.1 – 1.0 ppm (mg/L), and shouldn’t exceed 3.0 ppm. If the phosphate concentration is higher than this then your fish tank is at serious risk of an algal bloom.

An algal bloom is a nightmare for aquariums. Not just because they are unsightly and hard to clear up, but because as the algae dies off the oxygen concentration will be severely reduced and ammonia and nitrite levels will build up due to the decomposition. This can lead to ammonia poisoning.

In saltwater tanks ideally you want a phosphate concentration of 0.02 ppm or lower. The concentration shouldn’t exceed 0.05 ppm. As you can see this is significantly lower than the healthy phosphate levels in freshwater tanks. Phosphate is often present in tap water, so using this can increase the level in your tank. That is why it is advised to use distilled or RODI water for water changes and top ups.

What Are Aquarium Phosphate Removers?

Aquarium phosphate removers are, as you can probably imagine, products which actively remove phosphate from the aquarium water column.

These products are often made with metallic oxides, which bind phosphate as it passes over their surface. Oxides such as alumina oxide (aluminium oxide) and ferric oxide (iron oxide) are often used. The process of these metals binding phosphate is called adsorption.

In the following section we will review the 7 best aquarium phosphate remover products on the market today. As for what is the best phosphate remover, it depends on your personal unique tank setup. But all of these products will remove phosphates. 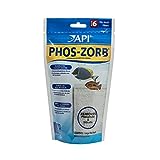 API Phos Zorb is produced using alumina oxide, which adsorbs phosphate and silicate, removing them from the water column. This phosphate remover will keep algae at bay by removing these compounds which they need to grow, and will also keep your water crystal clear.

The great thing about API Phos Zorb is that it comes pre-packaged in a filter bag. This means you don’t have to purchase an extra filter bag yourself. Simply put it straight into the chemical filtration media tray of your aquarium filter. The pouch fits most canister filters that are on the market.

API Phos Zorb can be used in any freshwater or saltwater aquarium setup. This gives you complete freedom in knowing that you will not get any downgrade in effectiveness if you have a different setup to the norm.

Seachem PhosGuard is made from alumina oxide. This metal oxide works to rapidly and effectively remove phosphate and silicate from the water column.

To get the best from Seachem PhosGuard you will need to first soak the media in twice as much freshwater, then rinse it. If you don’t you won’t get the best phosphate removal.

You can use Seachem PhosGuard in any canister filter, power filter, or trickle filter; it can be used anywhere where there is a good water flow over the media. You should use a filter bag to keep them contained so they don’t move in the filter. You should use 1/3 cup for every 50 gallons of saltwater 100 gallons of freshwater. 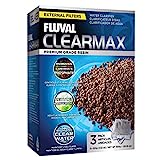 Fluval ClearMax is a premium grade resin that removes phosphate, nitrite, and nitrate from the water column by adsorption. Nitrite is a compound very toxic to fish, while nitrate is similar to phosphate in that it is an important source of nitrogen for plants. A high concentration of nitrate can cause algal blooms as well as nitrate poisoning.

Fluval ClearMax can be used in any freshwater or saltwater aquarium, but is more effective in freshwater setups. It will not remove nitrate from saltwater tanks.

You should rinse the media bag thoroughly before use to remove any fine dust that may be present. If you do not do this then your water may become cloudy. It is recommended to change this aquarium phosphate remover every month, as the exchange resin will no longer be active.

In the box you get three pre-packaged filter bags with the resin inside. This makes it incredibly easy and simple to put it in the chemical filtration tray of your aquarium filter.

Another aquarium phosphate remover from Seachem, PhosBond is a new product which is a combination of both granular ferric oxide and alumina oxide into one media. This synergistic effect rapidly removes phosphate and silicate from the water column; you get the best of both of these metallic oxide phosphate removers.

Seachem PhosBond can be used in any freshwater or saltwater fish tanks. The beads have a very high porosity which allows for an extremely large surface area. This makes it a lot more effective in removing phosphate and silicate from aquariums. It is very strong and can handle a lot of mechanical stress, and so won’t break down in your filter.

You should put Seachem PhosBond into a filter bag before you put it into the media chamber. It can be used in any filter type; canister, power, or trickle.

The Kolar Labs phosphate remover utilizes granular ferric oxide to adsorb phosphate and remove it from the water column.

It is fully safe for all freshwater and saltwater tanks, ponds, and reef tanks. Prior to using this product you should rinse it thoroughly to remove and fine dust that may otherwise cause your tank water to become cloudy. It can be used in any filter bags or filter socks, in any filter you may have, canister or power.

You should use 1 gram per gallon of water in your tank. 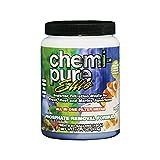 Boyd Enterprises Chemi-Pure Elite is an improved version of the original Chemi-Pure. It provides crystal clear water and works to remove phosphates, silicates, odors, and discolorations such as tannins from the water column.

This product contains a mixture of chemical media to remove this broad spectrum of impurities. It contains granular ferric oxide to remove phosphate, high capacity pelletized carbon, and ion-exchange resins.

All of this works to filter out phosphate and silicates, reducing the level of nuisance algae. It also removes dissolved organic material and eliminates osmotic shock. It will also remove coppers, metals, odors and phenol, and prevents ion antagonism. pH is also kept stable, and this product will last up to 4 months.

You should rinse this product well before using it in your filter or sump. You should use a good filter bag to house this media, and it is suitable for all freshwater and saltwater tanks. 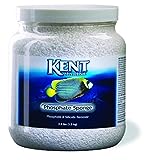 The Kent Marine Phosphate Sponge is fully suitable for any freshwater or saltwater tank, or indeed ponds if you are having a phosphate spike and algae problems.

This phosphate remover is a ceramic medium that not only removes phosphate but silicate as well.

It is incredibly effective at removing phosphate; for every dry quart of medium it will reduce 1.0 ppm of phosphate to 0.05 ppm in a 120 gallon tank. This is some serious phosphate removing power.

The beads in this phosphate sponge are cracked a little to increase the surface area and increase the impact of the beads. You should put these beads into a filter bag in the chemical filtration unit of the aquarium filter.

The downsides are that it needs to be rinsed very well otherwise it can cause the water to become quite cloudy as the dust runs into the tank. You also need to be careful to keep an eye on when this phosphate remover is saturated. Once it is saturated with phosphate it will begin to leak the excess phosphate back into the water column, increasing the concentration rather than decreasing it.

Hopefully this article on the best aquarium phosphate remover products has been helpful!

But API Phos Zorb and Seachem PhosGuard are the ‘classic’ products from big well-known brands, and are tried, tested, and proven to work well.