Giant Frogfish – An Overview of the Commerson’s Frogfish 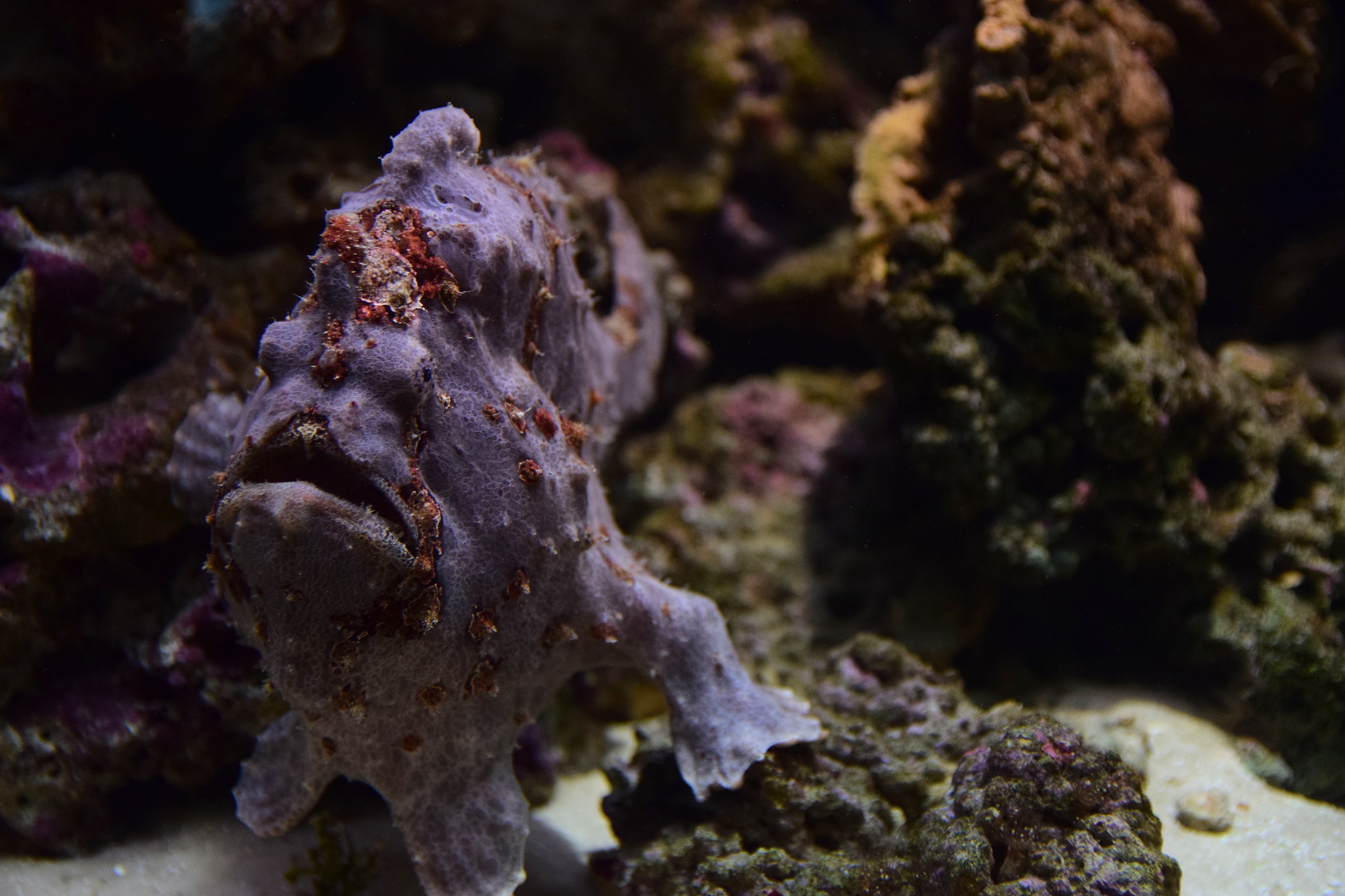 Home » Blog » Giant Frogfish – An Overview of the Commerson’s Frogfish

The Giant Frogfish, Antennarius commerson, is also known as the Commerson’s Frogfish. It is the largest of the frogfish family, and is, as all frogfish, a master of disguise and camouflage.

The Giant Frogfish is a member of the family Antennariidae and is found in the tropical and subtropical waters of the Indian Ocean to the east coasts of the Pacific Ocean, including the Red Sea and Lord Howe Island off the east coast of Australia.

Giant Frogfish are found in coral reefs, lagoons, and sheltered rocky reefs, and structures such as jetties. They prefer shallow waters, found on average 20m deep, but can be found up to 70m deep. 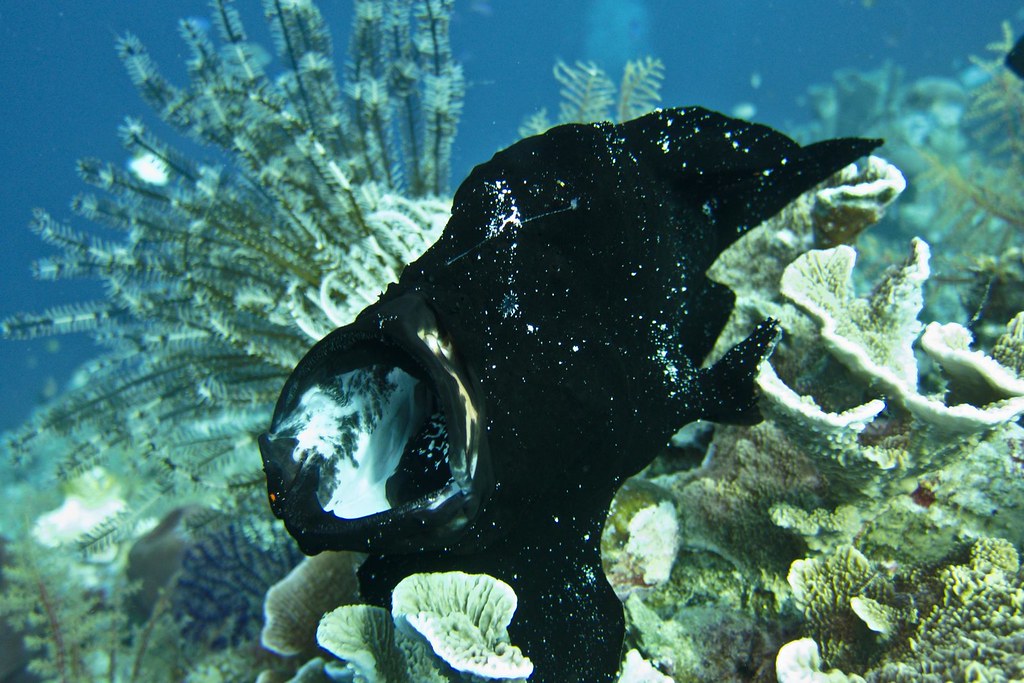 Aptly named the Giant Frogfish, they are the largest of the frogfish family, growing up to 15 inches long. Giant Frogfish are terrible swimmers. As all frogfish they instead use their pelvic and pectoral fins to “walk” along the seafloor, and to hold themselves in place for an ambush.

Like other members of the frogfish family they have a globular extensible body with a large prognathous mouth. This means that the lower jaw of the Giant Frogfish extends further forward than the upper jaw, allowing them to swallow prey as large as themselves. 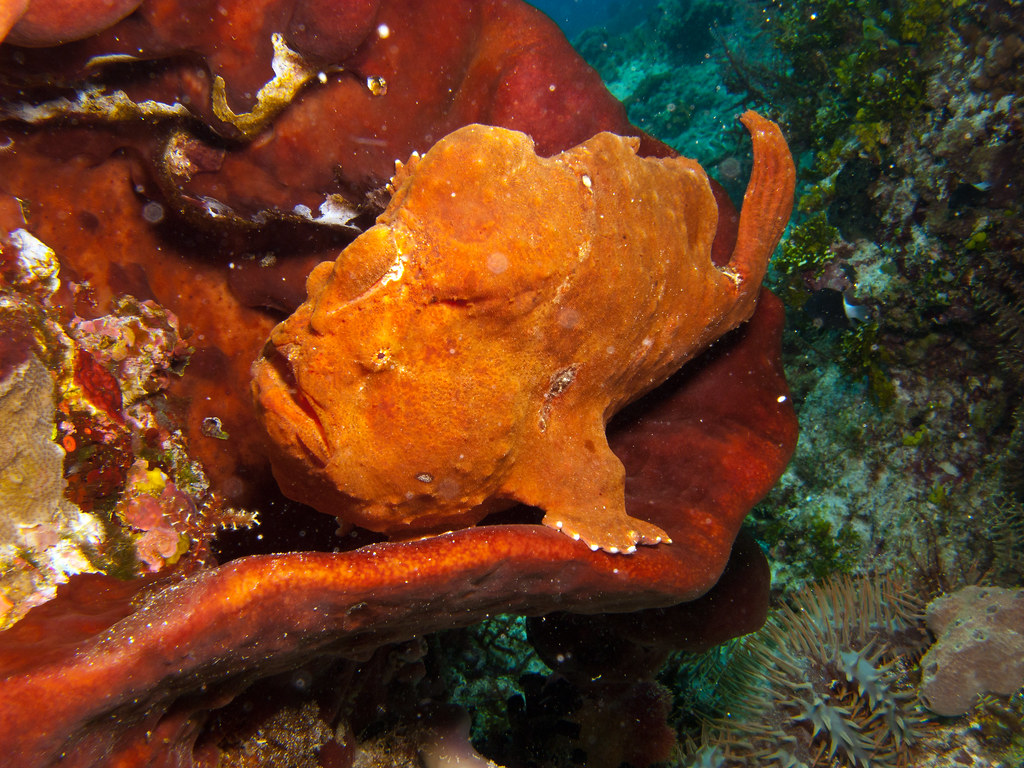 Giant Frogfish displaying color variation to match the coral background. Also note how it is stabilizing itself with its fins. Photo credit: Prilfish (Flickr)

As you can see from the pictures, the Commerson’s Frogfish is almost indistinguishable to the coral and rock that it hides itself in to lay its ambush.

It can change its color to match that of its background, hence why they are seemingly so perfectly camouflaged. However the coloration of Giant Frogfish is most often dominated by grey or black, or related colors such as red, orange, pink, and brown.

The Giant Frogfish also has skin which enables it to blend in better with its background as well. Warty protuberances and scab like discolorations help to make the fish look more like the coral and rocks that it hides in. Dark spots on the skin are designed to look like the holes in coral. The uneven texture of the skin makes the Giant Frogfish blend in seamlessly.

This camouflage is a type of aggressive mimicry. Aggressive mimicry is a form of mimicry predators use to gain an advantage over their prey, and to be more successful hunters.

As Giant Frogfish, along with all frogfish, are terrible swimmers, they instead need to find another hunting strategy to hunt and find food.

They use their near perfect camouflage to hide in plain sight, and use their strong pelvic and pectoral fins to hold themselves in place.

However they don’t simply wait in the vain hope that something will swim past; they have a trick up their sleeve. Like a true angler, the Commerson’s Frogfish has a modified dorsal spine called the illicium which it uses as a lure to attract prey.

As the prey gets closer, the frogfish uses the illicium to mimic the movements of the prey species. The Giant Frogfish will also slowly stalk closer to its prey. When the prey is close enough the frogfish will strike. This strike is so quick that there is no hope of escape. And with a huge mouth, prey can be as big as itself!

Frogfish are notoriously unfussy and voracious predators. They will happily eat anything as big as themselves, even other frogfish. They have been known to be attracted to divers, as they disturb fish making for a perfect opportunity for a meal. Some Giant Frogfish have been seen to eat up to seven fish in ten minutes!

Giant Frogfish live a solitary life, hunting and living by themselves. Indeed frogfish will happily eat other frogfish. The only time that they come together is when it is time to breed. Read our frogfish reproduction article for more information.

Even then, the males need to be careful. If they stay too close after fertilizing the female then she is likely to kill or eat him.

Antennarius commerson is oviparous, laying eggs which are bound in a ribbon-like sheath or mass of gelatinous mucus called an egg raft or veil.