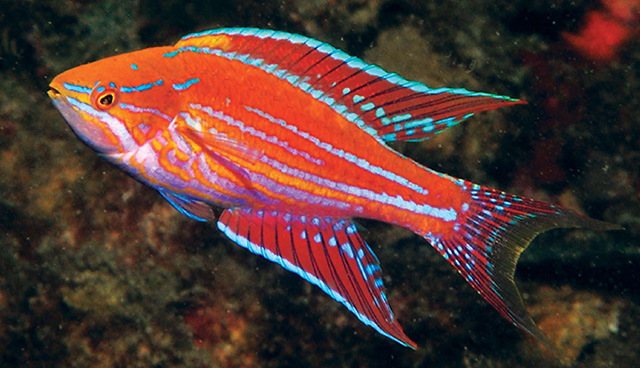 The Royal Flasher Wrasse is a member of the wrasse family Labridae. The Labridae are typically small and brightly colored, although there are exceptions.

The Royal Flasher Wrasse is found in the oceans of the Western Central Pacific, specifically the Philippines and Indonesia. They are associated with coral reefs and are found from around 10-40 m depth. They are typically found on shallow and sheltered reefs rich in coral and algae.

In the aquarium they have specific water conditions that they prefer. If these conditions are kept then they are easy to keep healthy. The conditions they prefer are similar to that most reef tanks will be kept at usually; they are reef fish after all!

Royal Flasher Wrasse are carnivorous fish. They are easy to keep in a home aquarium as they easily acclimate to an indiscriminate carnivorous diet. However they will leave invertebrates in a fish tank be, and will not eat or nibble at coral.

Angular Flasher Wrasse lack the long dorsal filament which is seen in many other species of flasher wrasse.

There are seven stripes on the body, violet to red in color. The top five stripes run the length of the body. The caudal fin of males is emarginate.

As adults Royal Flasher Wrasse can reach up to 3 inches in length.

Sexual dichromatism is exhibited in this species; the males are much more brightly colored than the females.

A very interesting trait is that the Royal Flasher Wrasse can can its coloration depending on its mood and time of day. This is how it ‘flashes’ its fins and coloration when displaying for a female, making its colors suddenly brighter.

Flasher Wrasse are so called because of the behavior the males exhibit in trying to attract female attention. The Royal Flasher Wrasse is no different and also displays flashing behaviors.

During courting and mating male flasher wrasses will make sudden, quick lateral movements whilst erecting his fins and also intensifying his coloration. This behavior is commonly seen taking place starting at a secure location amongst coral or rock near the sand bed, and then ‘flashing’ into the water column.

Due to this behavior they are well prized in aquarium reef tanks. However the flashing display is highly reduced if females aren’t present, or are present in a limited capacity. In their native habitat they occur in small mixed sex groups but females greatly outweigh the males.

Like all wrasses, all Royal Flasher Wrasses are protogynous hermaphrodites. This means they are born female and change to male as and when it is required. Once females transition to males, they first have an initial phase, where they are less brightly colored and not dominant. The second phase is the terminal phase. This is where the fish cannot revert back to being female, and are dominant and keep a harem of females and are at their most colorful. The terminal phase is also called super-male, which I think we can all agree is a lot cooler.

They aren’t aggressive or territorial, and do not exhibit any fin-nipping behavior. They are very likely to jump, so a tight top to an aquarium is a must.

The Royal Flasher Wrasse is safe to inhabit any fish only or reef saltwater tank. They are not aggressive and won’t eat or nibble coral.

Due to not being aggressive they can be housed with any other reef fish species, but it is often a worry with carnivorous reef fish that they will attack, harass, or eat any invertebrates such as mollusks and echinoderms which are present. However Royal Flasher Wrasse won’t eat invertebrates, instead happily eating a meat and fish based diet. They are therefore safe to house with inverts.

The only thing you need to consider is that they need a minimum tank size of 55 gallons. If you want to clearly see the flashing behavior exhibited that this genus is known for then you need to be aware that males will only display this behavior if they are in a group with a high ratio of females.

Typically a single male can be kept with a group of females. In this scenario they have someone to show off to, and the single male suppresses the females from switching sex.

The Royal Flasher Wrasse is a brilliantly colored and elegant fish that will no doubt introduce a flash of color to your saltwater tank.

They are not aggressive and can be housed in tanks with fish, invertebrates, hard coral, soft coral, and sponges.

Very easy to look after, they will eat basically anything they are given! All in all, they are a fish that will be highly prized in any saltwater aquarium.