Keeping aquatic carnivorous plants in your aquarium can be a real talking point. It is fairly rare that plants can actually digest and get nutrients from animals!!

Don’t expect something spectacular like a plant suddenly grabbing a fish out of the water, or having to feed your new monster special grubs or anything

There are two main types of aquatic carnivorous plants that can be kept in the home aquarium, the bladderworts and the waterwheels. In this article we will explain how to correctly keep these carnivorous plants and tell you the most common species and their differences.

Why Are There Aquatic Carnivorous Plants?

The name “aquatic carnivorous plant” can be a little misdirecting, as these plants don’t technically eat their prey for energy. They still photosynthesize and gain the vast majority of their energy from this process, although they may also get an extra boost of carbon to supplement that which comes from photosynthesis. However they can’t get enough nutrients from their environment, which is where the carnivory comes in.

Aquatic carnivorous plants have evolved in nutrient poor environments. The carnivorous behavior allows them to have a source of organic nitrogen and phosphorus beyond what they could otherwise absorb through their roots or from the water column itself.

Carnivory has enabled these plants to survive in very nutrient poor environments where other plants cannot. Carnivorous plants tend to be outcompeted very easily in nutrient rich environments, and so this is why these plants can be found in ponds, marshes, and bogs.

Aquatic environments tend to be quite nutrient poor and limited, making them great places for carnivorous plants to thrive. In a home aquarium these plants can be a great addition.

So they don’t need aquarium fertilizers to remain healthy, as they have their spectacular trait to get extra nutrition. However they will still need adequate lighting to be able to fuel photosynthesis, so ensure that you have a good LED lighting system.

You can also make sure that the temperature, general hardness (GH), carbonate hardness (KH) and pH are in the correct range.

Not only will your carnivorous plants enjoy nibbling on these small prey, but your fish will as well!

Your aquarium will have enough nutrients, and unless decent in some way won’t be a nutrient poor environment. So if you have other plants as well ensure that you keep them well trimmed and don’t allow them to outgrow and outcompete your aquatic carnivorous plants.

The Bladderworts are the best known of the aquatic carnivorous plants, and are members of the genus Utricularia.They can be amazing floating aquarium plants.

There are over 200 different species of Utricularia, with a global distribution with the exception of Antarctica. The majority, 80%, of these species are terrestrial, with the remaining 20% being aquatic plants. The terrestrial species inhabit waterlogged and wet soils where their bladders are permanently exposed to water where they capture rotifers. The aquatic species are mostly floating plants and are found in acidic ponds and muddy waters. They would grow happily in more alkaline waters but face much sterner competition in these waters. Some species are lithophytic and are found in running water and waterfalls.

Bladderworts are so called due to the anatomy of the carnivorous traps. They look like little seed pods or bladders which are located on the stems of the plant.

These bladder taps are incredible things, and are actually considered to be one of the most sophisticated traps which have evolved in plants. Unlike the trapping mechanism in the Waterwheel (Aldrovanda vesiculosa), the mechanism in Bladderworts is purely mechanical, with no reaction from the plant itself needed.

The bladder traps work by way of a vacuum. The bladders are essentially little rounded bags of water. Water is constantly pumped out of the trap via active transport, which bends the walls of the bladder inward, storing potential like a coiled spring. As a small planktonic animal triggers the trap the bladder springs open, and sucks in nearby water, with the animal along with it.

The bladders are triggered by several small hairs which protrude from next to the trapdoor. Even the smallest touch against one of these trigger hairs will break the seal of the trapdoor. At this point the walls of the bladder spring outward, creating a powerful suction to draw the animal in. As soon as the bladder is full of water the trap door closes again.

Utricularia gibba is also known as the humped or floating bladderwort. It is a small mat forming species which can be found distributed throughout all continents except Antarctica.

It doesn’t have true roots and is naturally found free floating in ponds or lakes or adhered to the substrate in shallow water. Floating bladderwort grows and forms mats of crisscrossing stems, each of which will grow to about 20cm in length. Flowers are produced on the end of stems which protrude around 8 inches from the water. The name gibba is Latin for “humped”, which describes the swollen lower lip of the bright yellow flower it produces.

Floating bladderwort is very easy to keep in aquariums, and will do very well in most freshwater tanks. 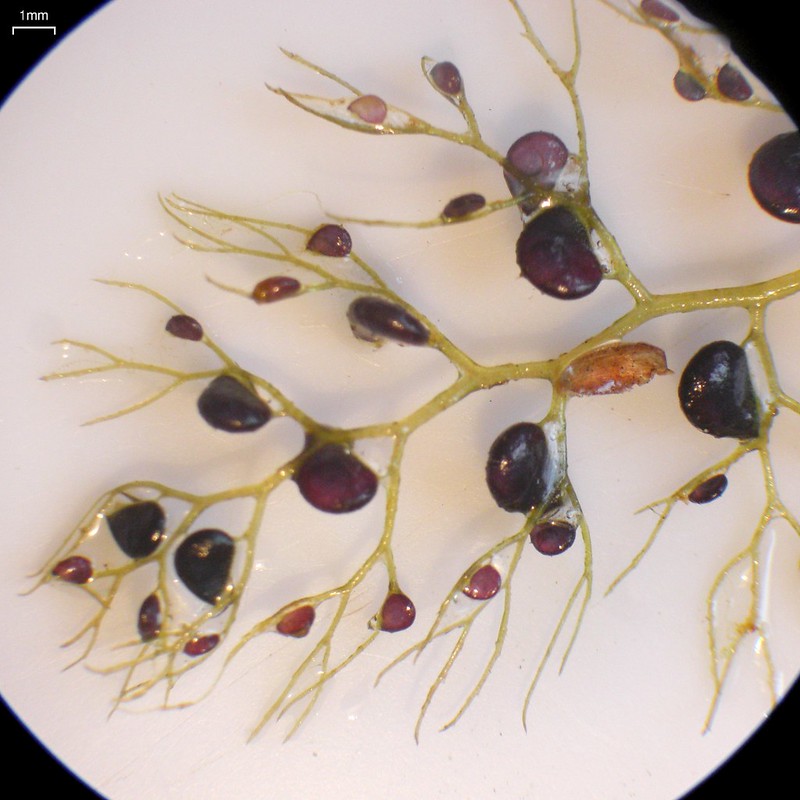 Utricularia vulgaris is also known as the common bladderwort. It has a natural distribution throughout Europe and Asia, and is very common in the aquarium trade. They are a floating aquarium plant.

They can be very fast growing, achieving a meter of growth in a single growing season before dying back for winter. Stems can reach great lengths in the wild, up to 30 feet. It produces small bright yellow flowers, and has many small bladder traps.

Utricularia purpurea is commonly known as the purple bladderwort due to the purple coloration of its leaves. 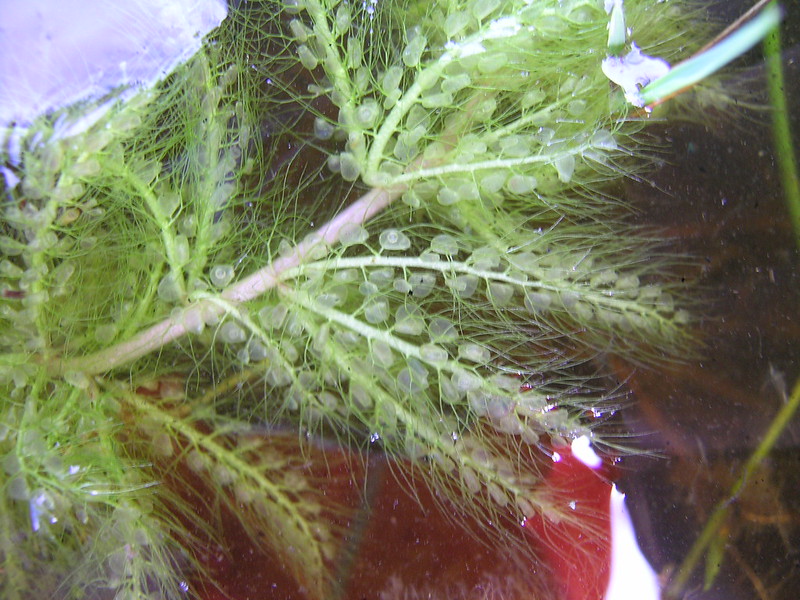 Utricularia aurea, or the golden bladderwort, is the most common floating aquatic plant found in Asia. Its native distribution in the wild ranges from Australia to India and Japan. The flowers are yellow in color with a hint of red, and may fail to produce bladder traps when kept in aquariums. It is a feathery stem bladderwort, which looks quite stunning in aquaria. 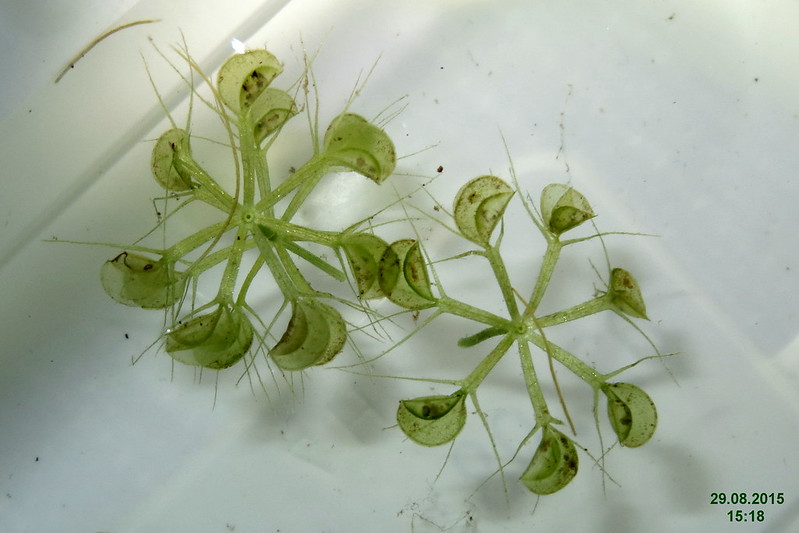 The waterwheel (Aldrovanda vesiculosa) is the only surviving member of its genus. It is a fascinating plant whose history dates back around 50 million years. It is the underwater sister of the venus fly trap, and is the only underwater plant to have evolved snap-trap carnivory.

What is incredible is the speed in which the trap closes. It is up there with one of the fastest movements in the entire kingdom of plants; only 100 milliseconds!

Also fascinating is that it is a global clone. This means that there is virtually no genetic diversity in the populations found all over the world. It is also found in an incredibly diverse range of countries and continents, with seemingly no continuity. It is found in sub-Arctic Russia, Australia, and Africa. In its natural habitat the waterwheel grows in shallow acidic waters of nutrient-poor swamps. Evolving in nutrient poor conditions is why it has developed carnivory.

However the small ecological niche that it inhabits has been its downfall; what is terrible is that in its natural habitat it is now endangered. From over 400 recorded populations in the 18th century there are now less than 50. Interestingly most of these are in the exclusion zone which surrounds Chernobyl. This is due to habitat destruction and degradation by humans. The waterwheel is very sensitive, and is one of the first plants to die at the polluting of its habitat.

Check out this awesome video showing mosquito larvae getting eaten by this incredible plant.

These aquatic carnivorous plants, especially the Bladderworts, have caused issues as invasive species in some regions of the world.

To counteract this, if you need to trim back your carnivorous plants, be careful of how you dispose of the cuttings. Don’t simply throw them away or dispose of them another way.

You should first dry out the cuttings until they have died. Wait until they are crunchy and crumble to the touch. They can then be safely disposed of without risk of releasing an invasive species.

Not only should you do this with aquatic carnivorous plants, but all aquarium plants that you trim and keep.

Hopefully this article of keeping aquatic carnivorous plants in the home aquarium has been helpful and informative!

Keeping bladderworts or waterwheels in a fish tank can be a great addition. Hopefully you choose one of these amazing plants!